The Waiter is Wrong, The Pastor is Wrong…But is Applebee’s? 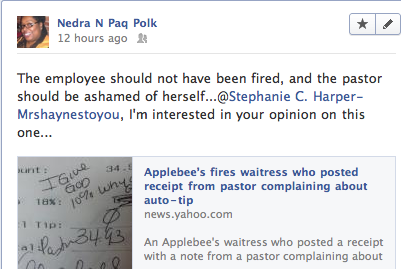 Have you ever heard the expression, “two wrongs, don’t make one right?”    There’s been a constant buzz about  Applebee’s terminating an employee who posted a receipt where a patron, who just happens to be a pastor, wrote “God gets 10% why do you get 18%” on a receipt.   The ridiculous thing about this “pastors” action is she wrote zero in where the $6.29 automatic tip was inserted and still paid her portion of the bill which was $34.93 (which actually includes the tip), but I won’t call her stupid, that would not be polite.

Removing the fact that this person is a pastor, (which is irrelevant to me, but it seems to be “the main reason” people are so upset) anyone who serves a party of 20 people deserves a tip – - and a nice one if they deliver on the service.   After all, isn’t that what T.I.P.S. stand for ? To Insure Proper Service.  In most restaurants, it is customary for the wait staff to receive an automatic 18% for parties over 8.  That’s not Applebee’s specific, but just a socially accepted “expectation”.  I’ve never been a waiter, but I know I’m funny about how my eggs are cooked.

All over social media and the blogshere, people are outraged that this employee was terminated behind this, but let’s remove emotion and look at this from another perspective.  As a 20+ human resources professional, I try to refrain from making decisions without gathering the facts.  Since I have zero documentation on what happened (other than second hand accounts), let’s consider the possibility of  things we don’t know, let’s start with these three:

Make no mistake about my position, the pastor was 100% wrong, but the employee is 100% wrong as well.  We know nothing about this employee other than she was terminated “as a result of her decision to post the receipt on a social media website”.  Truth is, she may not have been the best employee.  It’s quite possible that the restaurant already wanted to get rid of her (for whatever reason) and her actions of posting a “company record” to the Internet gave them just cause to terminate.  Even if the employee was a model employee, her actions have now brought negative press and unwanted attention to Applebee’s.   Almost every blog I read were people saying, “they would no longer patronize Applebee’s as a result of the termination“.  No matter the level of compassion we have, the employees’ action is causing a direct and negative response to the company’s bottomline.  Do I think Applebee’s will shut down behind this?  No, but they may receive some fallback and some loss income at least this weekend, those 2 for $20 meals rock!

Always remember your actions off the clock can affect what happens when you return back to work.

Even if Applebee’s doesn’t have a “what happens in Applebee’s stays in Applebee’s guest policy”, the receipt was not the employee’s to post.  It is company property. It is a financial record that belongs to Applebee’s and it should not have been “recorded and posted to the Internet”.  I know that people do it all the time, in fact, I just shared a receipt on own social media FB page on Jan 30, 2013, 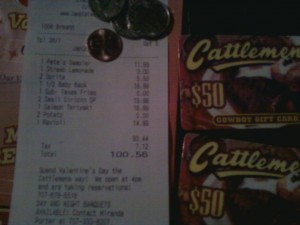 but, I’m not an employee of the restaurant (and my comments about the receipt were positive).  Regardless to the company policy, the employee doesn’t own the right to that receipt, it’s property of her employer.  Her job as an employee was to get it signed for payment processing and turn it in.

Always remember if it’s issued by the company, it belongs to the company.

By posting this receipt to the Internet, the employee of Applebee’s has subjected the pastor to identity theft.   According to a report from USA Today, the receipt posted on Reddit.com (the originator of the story) shows the FULL SIGNATURE of the pastor.  The employee had no right to share the pastor’s legal signature on any social media site.   It leaves the pastor vulnerable to thieves.  Anyone could copy the signature from the Internet, scan it, and use it inappropriately!  And guess who can get sued for that?  Applebee’s!  If the employee had posted about it and not showed the receipt or cropped out the signature, I may inclined to say she just erred in judgment.   To expose someone’s signature on the Internet does violate their privacy in my opinion (had this done to me in college where a roommate scanned my signature and added her name to my bank account, then cleaned it out…NO FUN!) I have to assume that is where Applebee’s drew the line also.  Another blog comment, I read was “the pastor caused this employee to lose her livlihood“.  Well, I disagree with that.  The employee lost her livlihood as as a result of making a poor decision.  At some point,  the employee has to be held accountable for her part in this.

Always remember anything in the wrong hands is a weapon.

In the service industry, this is a classic case of  “The Customer is Always Right”, even though we all agree the pastor is WRONG!  Sometimes, “we the people” forget that an action causes a reaction!    Countless employees have and will continue to be terminated for things that are posted on social media sites.  So I’ll share a tip with the readers of this blog that I’ve shared with my network many times, “don’t post anything on a social media site that you don’t want mom, management or the media to see!  It might be your “personal page”, but the Internet is PUBLIC!”

In closing, if I were the HR Director for Applebee’s, I MAY NOT have terminated this employee if this was her first offense but my decision would be based on the hard facts and company policy.  My recommendation would be that the employee be placed on a PIP (Performance Improvement Plan) and receive additional training.  In my professional opinion, I totally understand Applebee’s position and would support their decision to terminate.

I hope the employee has learned an invaluable lesson that everything is NOT for social media especially, business transactions that rightfully belong to an employer.  As for the pastor stating that she is ashamed for her ministry, well, she should be ashamed that the world knows she’s too cheap to tip $6.29.