Hair today, Gone Tomorrow…was it worth it Rhonda Lee?

There’s a ton of buzz surrounding Rhonda Lee, the KTBS Meteorologist “fired over defending her hair”…but IS that the real reason she was fired?  If you haven’t read the story,  you can read it her on Yahoo.

Personally, I think she looks fantastic with her hair and find it becoming on her.  Apparently, the station didn’t have a problem with her hair either.  The station had a problem with her responding to the viewer -or viewers repeatedly.  As a certified HR Professional (and a black woman)….I understand the position of the station. Rhonda knows her public persona is subject to all kinds of comments. She had a choice to engage or not engage with the viewer who posted about her hair. Really, who cares that a viewer doesn’t like her short hair?

According to the story on Yahoo, “Ms. Rhonda Lee was let go for repeatedly violating that procedure and after being warned multiple times of the consequences if her behavior continued,” KTBS-TV executives said in a statement posted on Facebook on Tuesday, after Lee appeared on CNN. “Rhonda Lee was not dismissed for her appearance or defending her appearance. She was fired for continuing to violate company procedure.”

If that is true, then I stand with the station on the termination.  Okay so this is probably NOT the response that many of you were expecting from me,…BUT…as a 20 year human resources professional (and an black woman)…let me say this.   Rhonda is a high compensated employee HIRED TO BE A PUBLIC PERSONA for the station.  Every time she opens her mouth publicly,  it is essentially a “response from the employer”  With that being said…she did not have to respond.  Again, I say, WHO CARES THAT A VIEWER DOESN’T LIKE HER HAIR?  It’s not a secret that there are double standards in every class of people…black/white, men/women, young/old, rich/poor…as in this case, I totally believe that Rhonda Lee has a right to be who she chooses to be. But I also know the station was paying her boo-coos of money to be who they needed her to be.

Sometimes we forget that social media and our expressions on social media are not a “free” as we’d like them to be.  There have been so many cases in the media about employees being terminated over Facebook and other social media outlets.  Sometimes we have to learn to hold our peace.  I believe this was one of those times.

The issue I have with this whole story is “the station” didn’t have a problem with Rhonda Lee’s hair and she could have (and should have) IGNORED the Facebook post and this whole nightmare would have been avoided.   Personally and professionally, I didn’t find anything “wrong” with her response,

“Hello Emmitt—I am the “black lady” to which you are referring. My name is Rhonda Lee. Nice to meet you,” she wrote on October 6, in the comments. “I am sorry you don’t like my ethnic hair. And no I don’t have cancer.”

“I am very proud of my African-American ancestry which includes my hair,” Lee, 37, continued. “For your edification: traditionally our hair doesn’t grow downward. It grows upward. Many Black women use strong straightening agents in order to achieve a more European grade of hair and that is their choice. However in my case I don’t find it necessary. I’m very proud of who I am and the standard of beauty I display. Women come in all shapes, sizes, nationalities, and levels of beauty. Showing little girls that . Little girls (and boys for that matter) need to see that what you look like isn’t a reason to not achieve their goals.”

“Conforming to one standard isn’t what being American is about and I hope you can embrace that,” she concluded. “Thank you for your comment and have a great weekend and thank for watching.”

However, I am not her employer and since another employee of KTBS (Rhonda’s Employer) was also fired for defending himself online (see Chris Redford’s Story here), this appears to just be the policy of the station and not racial motivated -but a practice of KTBS.   Sometimes we have to dig a little to find the truth. Many times those of us in the HR Profession are accused of siding with the employer (we don’t we are just tasked with enforcing the policies and procedures set by the organization), as I’m sure I will be due to my stance on this but this termination appears to be justified.  Again…her employer CLAIMS Rhonda was terminated for “repeatedly violating that procedure and after being warned multiple times of the consequences if her behavior continued!”  If Rhonda was terminated on this for her first offense, I would be outraged but repeatedly and multiple stands out to me.  Let’s remove the profession for a moment and look at this from another point of view, how many times will you tell your child repeatedly not to do something before you punish them for it?  Rhonda is not a child, but I think you get my point!

One thing we have to learn in this world, is we don’t HAVE to defend a lie, ALWAYS prove to be right, or ALWAYS make a point. That is where Rhonda Lee made her error.  Yes she has a right to defend her appearance, but why?  She choose to embrace who she was on the inside as she claimed in her response, of being comfortable in the skin and HAIR God gave her contribution to society and that should have been enough.  Personally, I think Rhonda could have made a stronger statement by not even giving thought to the Facebook post.  After all, it was just his opinion, it wasn’t worth her job!She’s an employee of the company and she didn’t have to be “in the meeting” to hear the unofficial social media policy” I’m sure she heard about it and I’m sure that she knew about about Chris Redford being terminated for defending himself online as well.  As an employee who is a public figure, (the news for Pete’s sake) Rhonda should have known it wasn’t worth it. She went to battle but lost the war!Rhonda Lee is an intelligent, educated black woman who knows that her VERY public position means everyone wont like her…her hair…her smile…her voice…her skin color… and to that..she should have said.. SO WHAT and kept it moving. In this day and age, people have to remember….the employer is paying you to be who they need to you be during the hours of “9-5″. 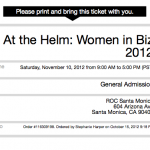 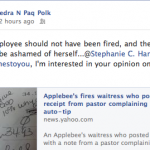